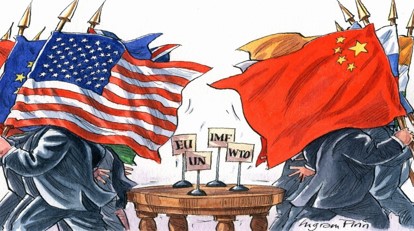 As we pause to reflect at the midpoint of the year, so far 2018 has served as yet another reminder that over the short term, markets are driven by innumerable and often random factors that are impossible to consistently predict. In the first quarter, US stocks experienced their first major losses since 2016 and a return to more “normal” market volatility. Fast-forward through three more eventful months and US stocks have bounced back, gaining 3.4%, while foreign stock returns were hurt by an appreciating US dollar. Developed international stocks fell 1.8% and European stocks declined 1.6% for the quarter. Emerging-market (EM) stocks fared the worst, dropping 9.6%. In bond markets, the benchmark 10-year Treasury yield pierced the 3% level in May, hitting a seven-year high. Yields then fell back, ending the quarter at 2.85%. As such, the core investment-grade bond index had a slight loss for the quarter and remains in negative territory for the year to date.

US corporate profits continue to be strong, aided by the tax cuts afforded in the new Tax Cut & Jobs Act.  There has also been a steady drumbeat of repeals to existing regulations on many industries, including my own, the financial services sector.  Thus far, the market has not been spooked by our greatly expanded national debt, which has bloated to over $21 trillion.  We will pay over $1 trillion in interest alone this year, driven by the borrowing needed to fund the recent tax cut stimulus and expanded government spending.  Corporations are enjoying the tax cost savings and they have kept up solid pace of hiring, which is benefiting economic growth.  The key going forward will be whether the stimulus will create enough growth to offset the expansion in national debt.

The major market news over the second quarter has been the escalation of the trade war with Canada, Mexico, Europe and China.  There is little doubt that the US has suffered from trade secrets being stolen by Chinese corporations and disadvantaged currency policy, enacted by China to help it emerge into an economic power.  The recent tariff threats with Canada, Mexico and Europe are less obvious strategically, but may well be a Trump Administration tactic to show commitment in pursuing a realignment of trade policy with China.  Thus far, China has not backed down as the tariff threats have been matched tit-for-tat.  As these tariff headlines get translated into actual policy, there is going to be a significant impact to the cost of imported goods, as well as our access to sell to foreign markets.  So far, the stock market has not reacted to these headlines, though the bond market is taking notice.  The consensus stock market view appears to be that the bellicose threats and counter threats will end up resulting in little net change or a reasonable settlement agreement.

We established a slight overweight (relative to our strategic weight) to Emerging Market (EM) stocks in late 2015 and we continued to gradually add to the position since then. Our thesis began to play out in 2016 and 2017, with EM stocks registering strong gains, which continued through late January 2018. Since then, however, they have declined sharply, and returns are now in negative territory for the year.  The selloff in EM stocks appears to have been driven by a combination of investor concerns about a potential trade war between the United States and its trading partners and a stronger US dollar.  When the US dollar rises, it takes more EM currency to translate back to dollars.  So, the value of our existing EM currency holdings is lower in US dollar terms.  This currency effect helped us in 2017 as the US dollar was weakening, juicing our returns.  It cost us quite a bit in the second quarter of 2018, as the US dollar strengthened.

These macro developments are indeed risks to EM stocks, at least in the shorter term. However, these are not new risks, nor do we believe they overwhelm the attractive fundamentals, valuations, and potential longer-term returns of EM stocks. We believe EM investments remain relatively attractive.  If the sell-off in EM stocks continues, I expect to add to the position.

On the fixed-income side, our portfolios were helped, on a relative basis, by our allocation to actively managed flexible bond funds and floating-rate loan funds. In aggregate, these funds contributed positively to quarterly portfolio returns and outperformed their benchmark.

The performance of our liquid alternative investments was mixed in the second quarter. Our lower-risk arbitrage strategies produced modest gains, outperforming core bonds and foreign stocks but trailing US stocks. Our position in a diversified basket of trend-following managed futures funds was positive in June, outperforming both stocks and bonds, but then gave it back and was net negative for the quarter.  These positions need a strong trend, either negative or positive, to add value historically.  However, we have been bouncing around without a strong trend, which has hurt performance in this sector.  We remain committed to the allocation, but mindful of recent returns.

It is understandable that fears of a global trade war are rattling financial markets.  Resolution of the current trade tensions is a meaningful uncertainty with the potential to seriously disrupt the global economy at least over the shorter to medium term. The process is likely prone to several more twists and turns before things become any clearer, as we are in the posturing for negotiations stage, at present.  We remain hopeful that we have a well-developed strategy to support the threats.

It is in the best interest of both the United States and China to negotiate a resolution and prevent trade skirmishes from becoming an all-out trade war. However, the potential for a severely negative shorter-term shock to the global economy and risk assets (not just emerging markets) can’t be dismissed. Even absent an actual trade war, the negative impact on business and consumer confidence from the uncertainty and fear of a trade war is a risk to the remaining longevity and strength of the current economic cycle.

The recent dollar-strength trend may also continue for a while. But there are reasons to expect the dollar may weaken looking further out due to the ballooning US federal budget deficit, a large trade deficit, and the eventual convergence of central bank monetary policies around the world.

We remain confident in the positioning of our globally diversified portfolios, which we believe are structured to perform well over the long term, while providing resiliency across a range of potential short-term scenarios. Should the current trade tensions resolve, and the global economic recovery continue, we expect to generate good overall returns, with outperformance from our European and EM stock positions and flexible bond funds.

Alternatively, should a bear market strike, our portfolios have “dry powder” in the form of lower-risk fixed-income and alternative investments that should hold up much better than equities. We’d expect to put this capital to work more aggressively following a market downturn by, for example, reallocating to US equities at lower prices and higher expected returns sufficient to compensate us for their risks.

As always, we appreciate your trust and we look forward to your questions.